In my imaginary closet

I've always been a little weary of color. I'm more of a muted, earth tones kind of person. But this spring has been a colorblock smorgasbord and I can't help but pretend to be on board.

Colorblock by nahollings featuring a heart necklace
No comments:

I have a whole bunch of sick days that I should use up before I leave working life for graduate school. So I told my boss that come beautiful summer days and slow work days, I may come down with some unexpected illnesses.

Even though this week has been pretty gloomy weather-wise, I decided to come down sick tomorrow and take a trip to Provincetown with a friend. I've been to the Cape before, but never to Ptown so I'm pretty excited. It's not going to be warm and beach weather, so I thought I'd pull together a warm nautical look for the occasion

Finally, after blogging and blogging about it, I got my hedgie! 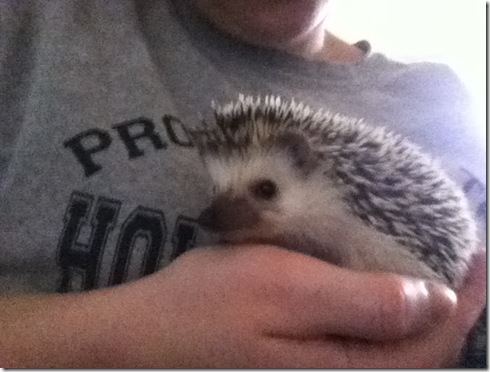 When I first picked him up he was such a bundle of fun (and poop).  But before I could take him home we had to do some shopping first.

He had temporary lodging in a cardboard box so obviously our first stop was the pet store. Everyone wanted to take a peak at him! 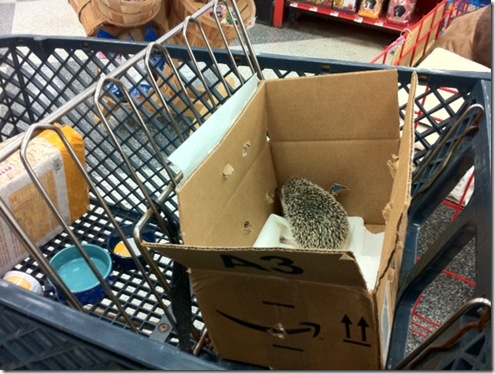 But he didn’t have to live in a cardboard box for very long, here he is surveying his new digs 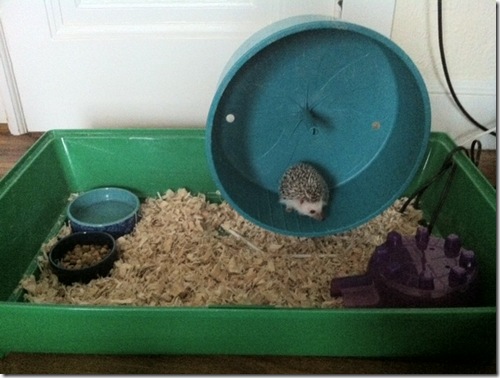 Actually, he didn’t like his igloo very much, so he’s been sleeping in an old tshirt of mine. Awww.

I also introduced him to some of my hedgehog memorabilia and he didn’t really care. 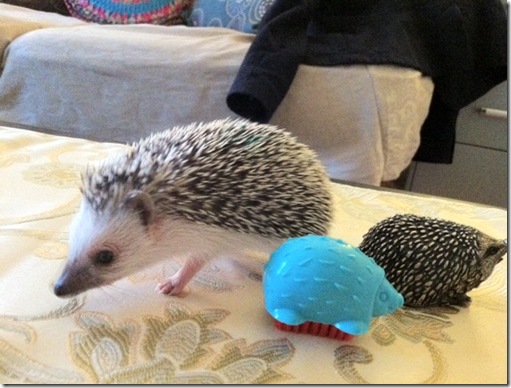 For a seriously adorable video of him, I suggest you check out my tumblr,

Also the teal color is from his breeder to mark him. It will probably dissolve after a while, but I do like that color so I’m not complaining.

I love my hedgie.

I cleaned out my closet a little bit this past weekend. Mostly dresses that each year I say I’ll wear, then after I put them on, I take them off immediately. Hopefully they’ll go to a nice home to someone who appreciates them.

In the meantime, however, I wouldn’t mind having this ensemble with a weekend destination in mind. I do need to visit Provincetown before I leave New England…

The weather doesn’t seem to show it, but it is, indeed, springtime.

Which means it’s time to plant herbs for summer consumption!

I was going to follow THIS fantastic tutorial by I Spy DIY but I couldn’t find any chalk board paint that wasn’t in quart size. Since I’ll be moving in August, I didn’t want to worry about transporting paint so that idea will have to wait until I’m a little more settled.

Fortunately, I remembered THESE planters that I purchased from ikea last fall. 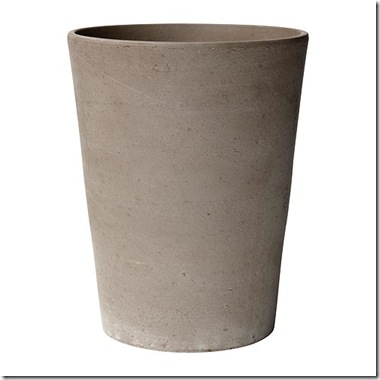 They were the perfect pots for my succulent cacti. And since I managed to kill them all (I blame it on sitting them on the radiator), I decided to re-touch the planters for my herbs.

All this required was a white colored pencil and a little design work to get these: 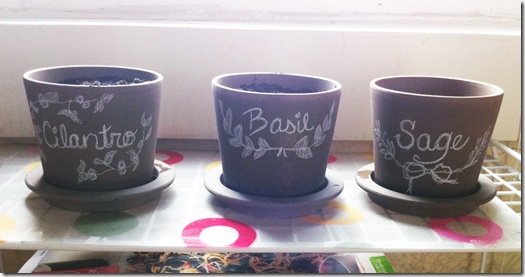 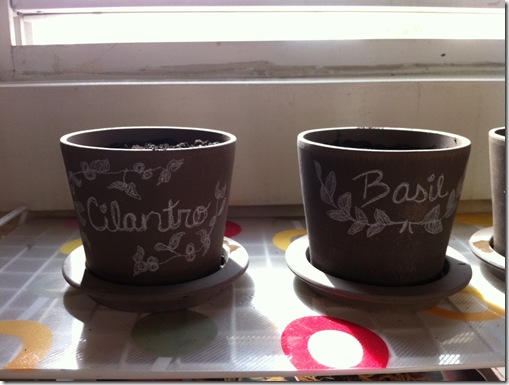 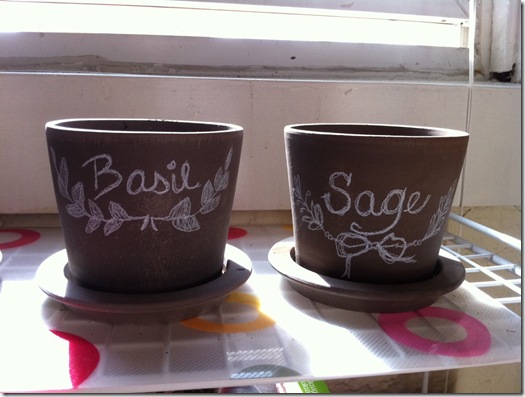 For the garland patterns, I looked to Shanna Murray’s beautiful decals.

I think they turned out rather cute. Let’s just hope they grow nicely.

I also need a nice planter for my lavendar seeds. When I was looking for my planter at ikea, they seemed to have some cute ones online. I think a trip to ikea needs to occur soon.

If you’re not familiar with Indian cuisine, samosas are these delicious deep fried pastries filled with veggies, lamb, pork or whathaveyou. I order Indian food a lot for work and try to snag one of these for myself before I feed the rest of the lot. What can I say, I’m a little a selfish.

When I saw THIS recipe for homemade ones, I thought I would give it a try. Now I am not a “from scratch” kind of girl. My thinking is, if they already made pie crusts, pasta and bread so readily and cheaply available, why should I bother making it?

But when the only substitute for the dough for this recipe would have been phyllo dough, I just knew it wouldn’t get the texture I wanted. Also this dough was easy, just flour and water, no yeast involved. So I thought I’d give it a go.

And just a warning, this isn’t step-by-step as much of this process was too messy for me to juggle a camera at the same time.

I started out by mixing up the dough and letting it sit wrapped up while the potatoes boiled and the peas defrosted. 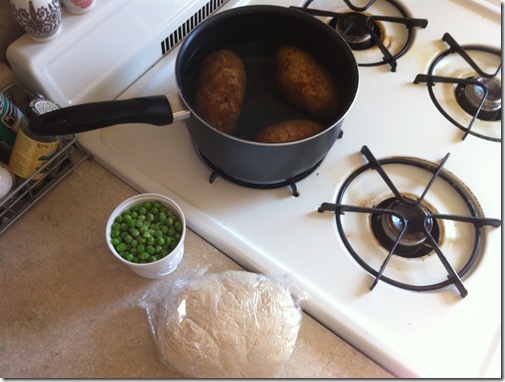 Once the potatoes were nice and soft (about a half hour), I removed the potatoes and boiled the cauliflower for 4-5 minutes. Then I cut them both up into tiny cubes/florets and added them to my bowl.

You want to cut everything up small because your going to have to stuff your samosas and the smaller, the better. 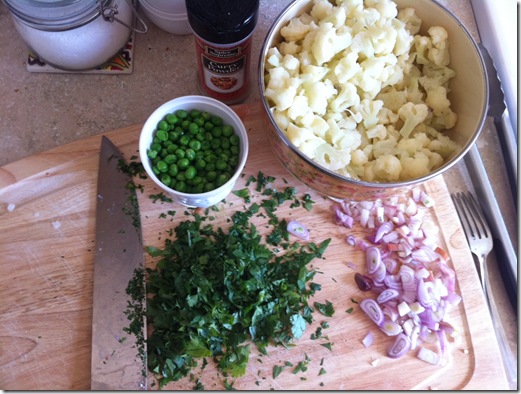 I used my trusty wok to sauté the shallots, potatoes, cauliflower and peas. Then I added the cilantro and curry powder to get this tasty contraption. 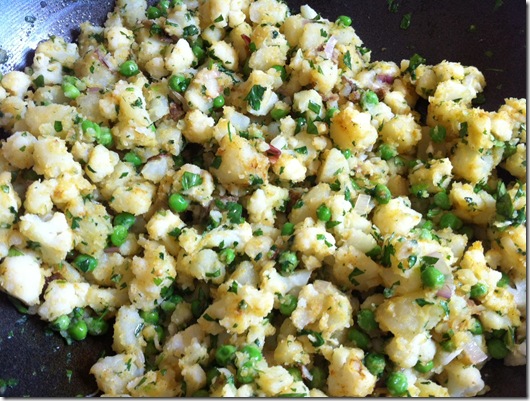 Then comes the part that I almost wanted to quit on. I separated the dough and rolled it out individually but I had a really difficult time stuffing the samosas without tearing the dough. And if you’re going to deep fry something, trust me, you do not want tears.

The recipe tells you to hold it like a cone which DID NOT work. It was three times easier to just spoon the potato/cauliflower mixture on one-half of the half-circle dough and then wet the seams, encase the mixture, and close with a fork.

Also I didn’t have any wax paper and my first solution of using aluminum foil did not work, the dough just stuck and ruined some of the samosas. The floured pan seemed to work better but the sticky dough situation was really, really frustrating me. 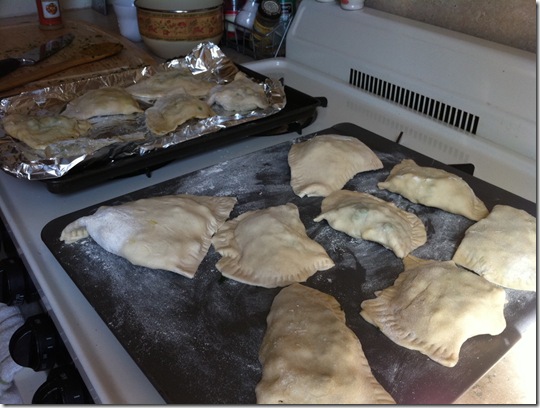 But I was able to salvage all but perhaps two and the deep frying was super easy. Once they are all fried up, you are ready to eat!

I highly suggest serving with mango chutney! Though it sucked at times these were truly delicious! 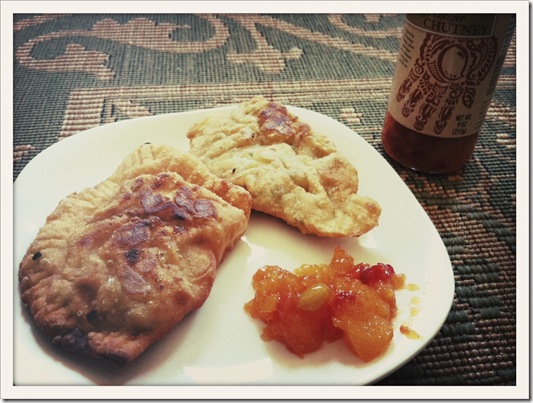 I still stick to the fact that the phyllo dough would not have yield the results I wanted. But will I be making this recipe again soon…likely not. Nor any other dough for that matter.

Also I was able to use the left over potato/cauliflower mixture for a tasty brinner – just add an egg and you have a tasty curry hashbrown with cauliflower and fried egg. I think that needs to be on a brunch menu somewhere.

As I said in THIS POST, I decided to make beer bread this weekend using a recipe from this great foodie blog, Honest Fare.

Not only did this blog provide a great recipe, but [he/she] also took it a step further by creating a Beer and Cheese Sandwich.

I followed the beer bread recipe and ended up with this yummy treat below: 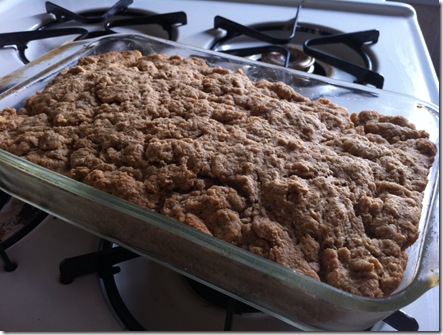 In case your wondering I used Newcastle beer and found it to be a pretty dense textured bread. Not light and airy like a cheaper beer might provide.

Since my bread was a little thinner then the original recipe called for, I thought attempting to actually grill it, like I do a panini, might come out as sloppy disaster. So I went with a broiling method which proved very successful.

I caramelized the onions and loaded them onto my bread slices. Then I put sliced Irish cheddar and Fontana cheese on top 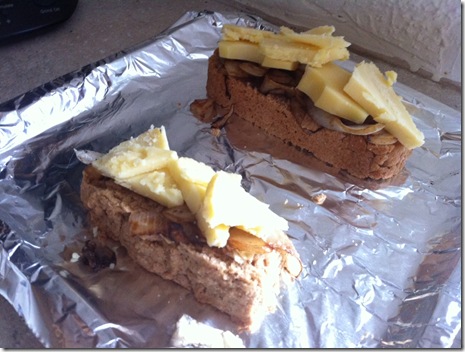 After a few minutes in the broiler, the cheese was gooey, warm and the meal was delicious 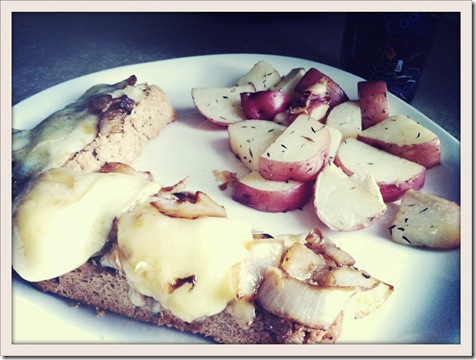 Oh the globs of cheese.

I’ve been all about the comfort food lately. Perhaps when they’re not calling for three inches of snow (like they are tonight!!) I can get back into my fish and veggie summer phase.

That will be nice.